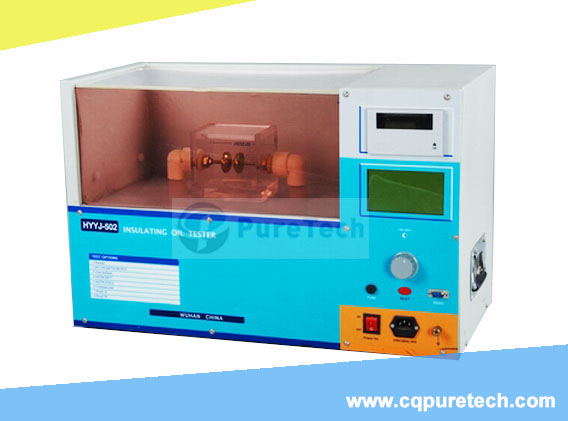 The breakdown voltage of transformer oil depends on many factors:

(1) The shape and size of the electrode;

(2) The distance between the electrodes;

(5) The characteristics of the applied voltage, the boost speed;

(6) Water, fiber, acid and other impurities.

In engineering practice, the first 5 items are fixed or basically fixed. The actual problems we encounter are all from the sixth item, how to remove the water, fiber and other impurities contained in the oil is the central task of our oil filtration work, what's more,  the most difficult to control is the problem of moisture/water contained in transformer oil.

Water in new oil usually appears in three basic states, namely: (1) water deposited on the bottom of the container; (2) dissolved water; (3) water in an emulsified state. For insulating oil with certain characteristics, at a certain temperature, the content of dissolved water and emulsified water is certain, and the excess water will be deposited on the bottom of the container under a long-term static state. If it is not agitated, at room temperature, the water has little effect on the electric strength of the oil. Therefore, sometimes water or oil with a lot of water can be released from the low point of the container, but the insulating oil taken out from the upper and middle part of the container still has a high withstand voltage value. In this way, some of the water directly falls into the oil, and some is formed when the oil is aged and transformed into dissolved water. Therefore, in the qualified insulating oil stored for a long time, the deposited water will also be found.

The deposited water is separated from water and oil in a natural state. Therefore, it should not be mixed back into the oil when filtering the oil. We should make full use of this feature. For example, after a small barrel of new oil arrives, It should be stored vertically. When pumping oil, a part of the residual oil is left at the bottom of the barrel and finally collected together for further filtration. It is best to use oil separately from the dirty oil tank and the oil tank for filtering oil.First, it should be stored in the dirty oil tank for a period of time (not less than 3~5d), and then the oil drain valve from the side (not the bottom) of the dirty oil tank Take it out and pour it into another clean oil tank to recirculate and filter. Leave the deposited water in the dirty oil tank.

The moisture content in the oil is closely related to the temperature and the hygroscopicity of the oil itself. The hygroscopicity is also related to the presence of surface active substances and polar substances in the oil. In most cases, these substances refer to the formation after oxidation. Materials, charcoal and naphthenic acid. It should be pointed out that the rate at which oil absorbs water vapor from the air is much faster than direct contact between water and oil. Therefore, when storing and filtering insulating oil, every effort must be made to reduce or avoid direct contact between oil and humid air. Literature data show that when the temperature is 25℃, the water content of oil and air after 30d is more than doubled when the relative humidity is 80% than when the relative humidity is 25%.

It can be seen that, in order to improve the withstand voltage, some test personnel put the test oil cup containing the insulating oil in the drying box for baking. This approach is not correct. It cannot reflect the true situation of the oil because the temperature rises. After high, as the moisture status changes, the oil insulation strength will be significantly improved. The water in the emulsified state cannot be removed by ordinary clarification, filtration and other mechanical methods. This is one of the reasons why the oil filtration can not get a good effect at low temperature, so the oil filtration must be carried out at a higher temperature. The more surface active substances in the oil, the more stable the water in the emulsified state, so the aging of the oil will promote the formation of emulsions, which is not conducive to the improvement of electrical strength.

The content of dissolved water is related to the temperature of the oil. The higher the temperature, the more water is dissolved in the oil. When the temperature decreases, the excess water separates as water droplets, slowly sinks to the bottom, and the temperature dissolves to Go in the oil. Therefore, when the ambient temperature changes day and night, the oil continuously absorbs the water in the air, so that the water left in the oil gradually increases. It can be seen that repeated changes in oil temperature are detrimental to the oil. Generally, when the oil temperature is lowered at night, the humidity in the air is gradually increasing (up to 80% to 100%), so the impact is more significant. Using open-air oil tanks to filter oil, such as when the upper space of the tank is freely connected to the outside air, it is often difficult to improve the insulation strength, which is an important reason.