What are the hazards of turbine oil deterioration?

Lubricating oil mainly plays the role of lubrication, speed regulation and heat dissipation and cooling in the steam turbine. If the oil deteriorates, not only can it not play the above roles, but it will cause system failure. According to national analysis and statistics, most of the damage to the bearing and rotor of the steam turbine generator is caused by the failure of the lubricating oil system.

This shows the importance of qualified oil for safe operation and the necessity of a Turbine Oil Purifier to keep the turbine oil clean and qualified.

If the oil is contaminated by impurities such as water, metal, dust, degradation product precipitation, sludge, varnish, etc., the oil viscosity and other properties will change until it is unqualified, and the formation of a complete thin oil film between the lubrication gaps of the sliding bearing cannot be guaranteed. It is impossible to convert all solid friction into liquid friction, which affects the safe and economic operation of equipment. Thereby, the turbine oil filtration is necessary.

Oil essentially acts as a hydraulic working fluid in the governor system, providing the power to control the size of the steam turbine valve for the governor's governing security system. Under special circumstances, it can also make emergency guards act and realize emergency shutdown. If the oil quality is degraded, the aging products and impurities in the oil, coupled with the corrosion of the equipment, may cause jamming in the passage of the speed control system oil (some gaps are originally small), causing the action to fail, which will seriously affect the unit Safe operation.

The operating speed of the steam turbine unit is generally 3000/min, which is relatively high. Although the solid friction is replaced by liquid friction, it does not mean that there is no friction, but the friction is greatly reduced. Due to the high speed, the internal friction of the bearing will still generate a lot of heat. This relies on the continuous circulation of lubricating oil to take away the heat generated, first enters the fuel tank to dissipate some of the heat, then goes to the high-efficiency oil cooler for cooling, and then returns to the bearing to take away the heat, repeating the cycle to achieve heat dissipation Cooling effect. If the oil deteriorates, the aging products of the oil are dissolved in the hot oil. When the oil temperature decreases, these aging products will be deposited, especially in the oil cooler, which will decline the oil cooler cooling efficiency (a large amount of heat in the oil stays in the oil cooler and transfers the heat to the cooling water), in other words, it affects the heat dissipation and cooling effect. If the vicious cycle continues, the safe operation of the equipment cannot be guaranteed. 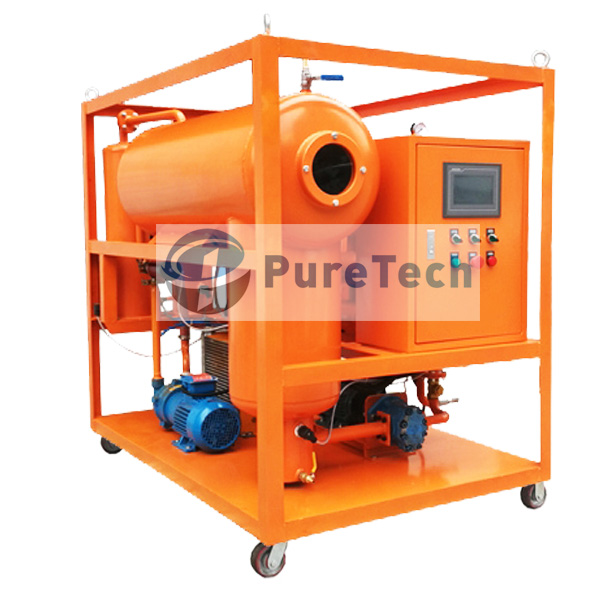 Turbine oil purification system should be used to periodically, irregularly or uninterruptedly purify the turbine oil in the lubricating oil tank, remove moisture, varnish, dust and other impurities.